Harnessing the power of genomics is driving genetic gain and providing the key to improved herd performance on a Wiltshire dairy farm.

Achieving a swift and consistent improvement in genetic merit across his herd of pedigree Holsteins was the primary goal for Steve Pinniger, following an ambitious programme of investment and expansion at Upper Littlecote Farm.

Genomic testing proved to be the tool which enabled Mr Pinninger to select his elite females for breeding replacements. Taking advantage of Cogent’s Precision DNA services has enabled him to be guided by the experts to ensure he makes the most of the latest genetic technology. He says:

“After signing up with Cogent’s Precision Repro service in 2016, they now do all the heat detection and AI for us. We started genomic testing the bulling heifers about 18 months ago, but we are now testing all the calves at birth because we can see the benefits this will bring.

“This has enabled us to choose the best 30 percent to 40 percent of our milking females and use sexed semen on these, serving the remainder to beef semen. The genomic testing is providing us with very detailed information and so we are able to focus on the attributes we are seeking for our herd replacements.

“We are essentially trying to speed up the process of genetic improvement, and we are concentrating on the younger cohort of females in the herd. We are looking carefully at the results of the genomic testing so we can select for better fertility, greater longevity and good legs, feet and udders.

“Sometimes the data from the genomic testing will reflect our own observations of our animals, but sometimes it throws up something unexpected. Occasionally we will have a cow which I think is exceptional and performs really well but the results of genomic testing suggest to the contrary, perhaps pointing to the lower potential transmitting ability of these genetics.

“Another time, we might have a cow which genomically is very strong but we know we do not want to breed from her, perhaps because of her temperament or a particular trait we would rather was not passed onto the next generation of females.

“It is important to look carefully at the results but to also to use instinct to make decisions about the best heifers to breed replacements from,” Mr Pinniger advises.

Similar principles apply to the selection of genomic bulls and Mr Pinniger now chooses the sires which will produce the figures required by his milk contract.

“Initially I was seeking increased production but we found we were starting to lean too heavily towards volume and so our butterfat and protein levels reduced. By working closely with our Cogent adviser, we can pick out bulls which will sire daughters which will continue to produce the yield but without compromising on milk quality,” Mr Pinniger explains.

Another significant advancement was the switch to using sexed semen, initially just on the maiden heifers but now on the milking cows as well.

“The new Cogent 4M High Purity sexed semen is extremely reliable, giving us 96 - 97 percent females so we are confident to use it on a higher proportion of our best females. We use sexed semen on the top 70 to 75 percent of the heifers and the rest are sired with beef semen.

We are no longer using any conventional Holstein Friesian semen as we find our conception rates from the sexed semen match those from conventional, so the best performing third of the milking herd is now also served with sexed semen.

“We have found that buying the best beef genetics is paying dividends as we are breeding a more consistent, quality beef animal with a better shape and growth rates. This gives us a more valuable calf and a higher margin income stream.

“I was concerned we might encounter calving problems when using pure beef breed semen so we always look for high easy calving indices in our bulls. As a consequence, we have had very few calving difficulties.

“I am now considering switching to sexed beef semen in the future because my buyer is looking for bull calves so our Angus male calves have been worth twice as much as the females over the last six to nine months,” Mr Pinniger adds.

This targeted approach to rearing replacements and maximising income from beef calves has been made possible by genomics, Mr Pinniger says, and by focusing on the younger cohort, it has been possible to speed up the process of genetic gain.

“Alongside selecting the best genetics, we have looked to the latest research so we can take positive steps to better manage our cows. We have improved the day to day management of our dry cows and in calf heifers, ensuring we focus on the critical late pregnancy stages.

“This has contributed to a big reduction in calving problems. We also split our dry cows into a far off and close up group and feed them two bespoke rations respectively and this has made a big difference to their wellbeing both during and after calving,” he explains.

Mr Pinniger believes genomics holds the key to delivering substantial advances in other key performance indicators, particularly feed efficiency which is one the main drivers for profitability and reducing a herd’s carbon footprint. He also has other objectives for his herd and thinks genomics may allow him to realise these:

“I am looking for increased longevity in my cows as the ones which stay in the herd the longest are the most profitable. I would like to be well above the national average in terms of number of lactations and I think genomics can help me attain this goal.

“It is early days for us here at Upper Littlecote because the replacements which are out of females selected through genomic testing are just entering the milking herd. But I am confident they will live up to our expectations.

“I am really excited to see how these heifers perform during their first lactation but realistically, we will only really see the true value of genomic testing when they are in their second and third lactations and we begin to identify the elite females amongst their progeny.”

GRAHAM Higgott has worked with Steve Pinniger for five years advising him on the use of genomics to inform the selection of females for breeding to sexed semen and the choice of sires. He explains how the process works to maximise genetic gain.

“We are breeding from the best, driving genetic gain as well as saving time and money associated with rearing lower value animals. “The process has proved particularly useful in identifying outliers which may have been ‘average’ on parent average, but have proved to be ‘super heifers’ or ‘poor’ when genomically tested. This ensures only the best heifers are served to dairy, meaning only the top performers produce replacements and beef semen is used on the lower end.”

How does the process work?

Genomic testing enables an animal’s genetic potential to be predicted from a young age by comparing its DNA to a ‘key’ which is representative of the national bovine population for a specific breed. 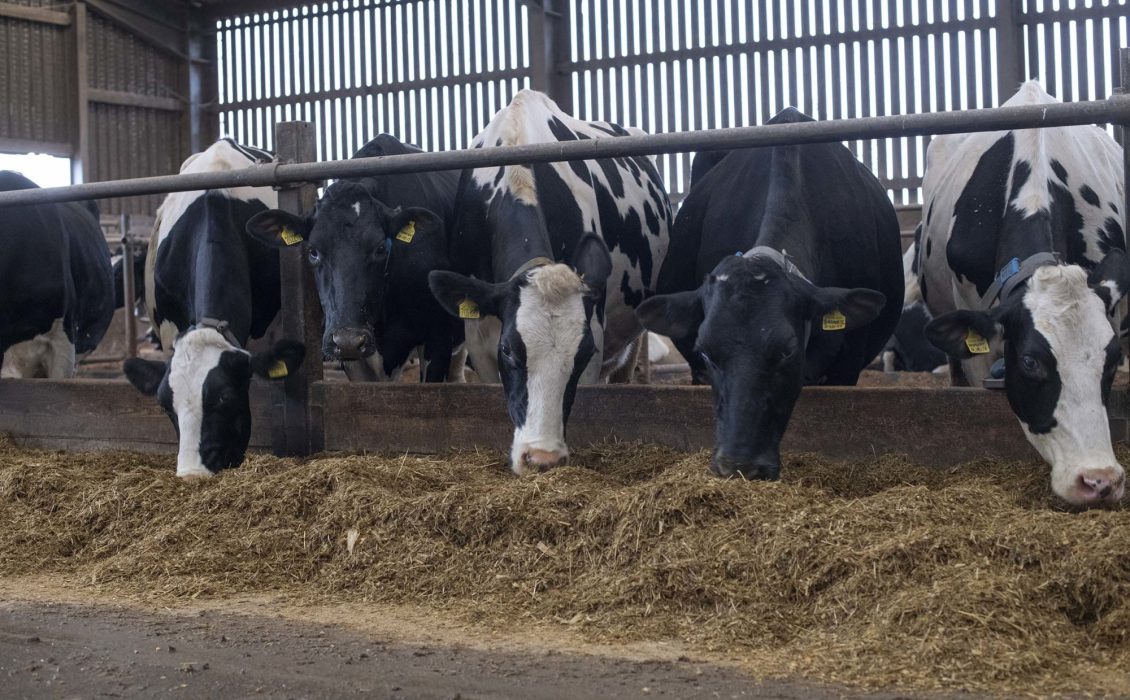